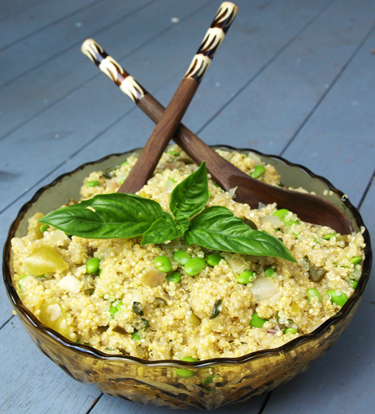 Poblano peppers are one of the most mild of hot peppers, measuring 1,000 to 2,000 Scoville Heat units. This is quite modest compared to, for example, it’s fiery relative the cayenne pepper, which has a heat unit of 30,000 to 50,000! The light spice of the poblano makes it a very versatile ingredient in the kitchen, and since it won’t singe taste buds, you can really taste its flavor.

The heat in poblanos and other peppers is caused by plant compounds called capsaicinoids, which are generally thought to exist as a natural deterrent against animals and fungi. Capsaicinoids have been linked to several health benefits over the years including, improved circulatory and heart function; pain management for arthritis, neuropathy and psoriasis; balanced and healthy cholesterol; increased metabolism; and even prevention against prostate cancer. Of course, poblanos mildness does means it has less capsaicinoids than the aforementioned cayenne or even a jalapeño, but it is worth noting.  And, like most veggies, all peppers are low in fat and cholesterol, high in fiber, and contain free radical-fighting antioxidants — a great addition to any diet!

We’ve posted a few recipes on the blog that feature poblanos; Summertime Chili, Creamed Sweet Corn with Poblanos, and Stuffed Poblanos with Mexican-style Quinoa. The recipe below uses two superfoods, edamame and quinoa, as well as flavorful basil and tomatillos, making it not only a nutritious, but delicious dish.

Method:
Heat enough water to cover edamame pods and bring to a boil. Add edamame and blanch for 3 minutes. Drain and set aside.

Heat oil in a heavy-bottomed pan or pot (a dutch over works great). Add onions and cook until translucent, about 3-4 minutes. Add garlic, tomatillos, and jalapeño and cook until tender, about 5 minutes. Add quinoa, basil, and broth and bring to a boil. Reduce heat to low, cover and let simmer 10-15 minutes, until quinoa is cooked through.

Shell edamame and put beans aside.

Remove quinoa from heat, stir in edamame and let sit for 5 minutes. Salt to taste.

Post and photo by Mikaela D. Martin: Blooming Glen CSA member since 2005, board-certified health counselor, and co-founder and -owner of Guidance for Growing, an integrative wellness practice in Souderton. Read more about healthy eating and living on her site, http://guidanceforgrowing.com! 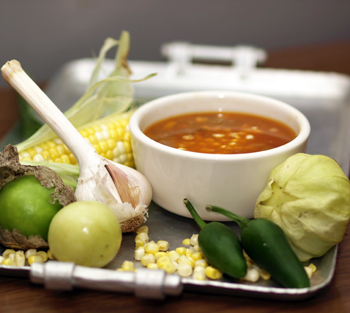 Tomatillos, a staple of Mexican cuisine, have been becoming more and more popular. Known for their unique husk, fresh colors and tart, citrusy flavor, tomatillos are high in the fiber that’s essential for weight, cholesterol and blood sugar management as well as digestive health; vitamin C, which aids everything from our immune system to cancer preventions; and vitamin K, a bone- and blood-supporting vitamin normally found in dark, leafy greens. Their versatile and simple preparation options make getting this nutrition into our diets pretty easy!

Use tomatillos raw for classic Latin American salsas and sauces such as salsa verde and guacamole, chopped and sautéed in stir-fry, or cooked up for soups. The soup below pairs tomatillos with several other players in the Blooming Glen CSA share: flavorful and robust garlic and onion, jalapeño peppers that compliment the citrus flavor of the tomatillo, sweet peppers and corn that temper the tartness of the tomatillos, and potatoes that lighten the spice of the jalapeños.

Add 2 cups of chopped tomatillos (to prepare your tomatillos, peel off the husk and then wash the fruit to remove any sticky residue), 1 large diced potato, 4 cups of broth and 1 cup of water to the pot, heat to boiling, and then reduce heat to low. Cover and simmer for 15 minutes.

Stir in a 15-ounce can of cannellini beans, kernels from 3 small ears of sweet corn and 2 tablespoons lime juice. Serve with fresh bread (Bakers on Broad has excellent options, including gluten-free) and toppings such as cilantro, green onion, chives, plain yogurt, sour cream, broken baked tortilla chips and corn kernels.

Post and photo by Mikaela D. Martin: Blooming Glen CSA member since 2005, board-certified health counselor, and co-founder and -owner of Guidance for Growing, an integrative wellness practice in Souderton. Read more about healthy eating and living on her site, http://guidanceforgrowing.com!

Posted at 12:12h in Recipes by bloomingglenfarm 0 Comments
0 Likes
Share

This flavorful chili is a very light and healthy recipe that utilizes a lot of this week’s share–onions, tomatoes, tomatillos, hot peppers, summer squash, and okra. This is a great way to use up some of those items you may not know what to do with. Tomatillos give this chili some sweetness and depth of flavor, while the okra gives it some good texture and acts as a thickener. 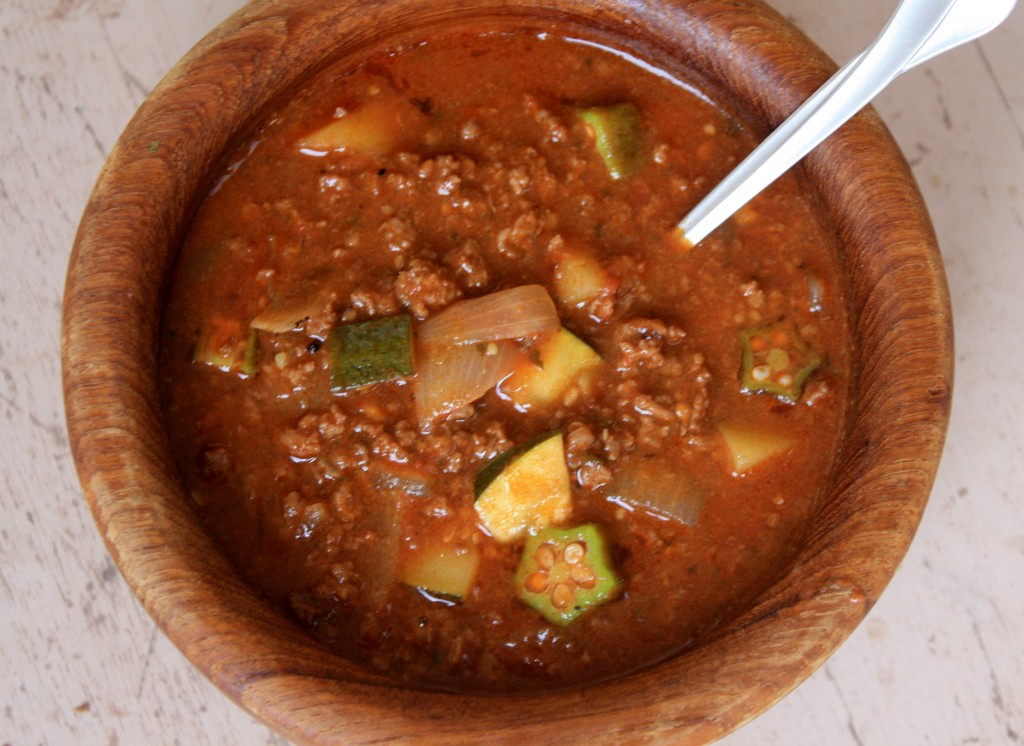 –Cut up 2 pounds of tomatoes into quarters and put on baking sheet with: 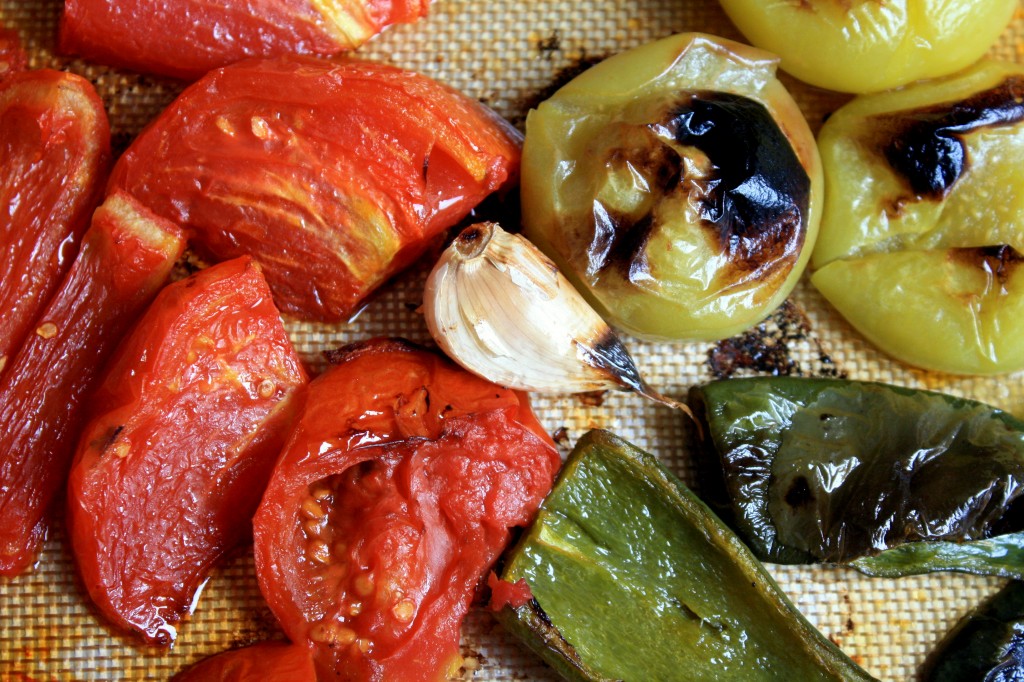 -Drizzle all veggies with a little olive oil and place in a 400 degree oven for 20 minutes or until they start to get tender and brown slightly. [**The last 5 minutes I set my oven to BROIL to char the veggies a little bit, but feel free to simply roast if you don’t like that flavor] Set aside to cool.

-Meanwhile, in a large stockpot, saute 1 white onion and 2 cloves of garlic in a few tablespoons of olive oil over medium heat. Cook until translucent and add 2 heaping tablespoons of tomato paste. Mix well.

– Add in with the onions 2 pounds of ground beef (Tussock Sedge Farm is both local and grass-fed) and brown until fully cooked. Salt and pepper generously.

-Place all of the roasted veggies in a food processor with 1 teaspoon of salt, 2-3 tablespoons of chili powder and 1 teaspoon of cumin. Pulse until pureed.

-Add pureed mixture in with the cooked beef and onions along with 2 medium sized summer squash, cut into small pieces, and 1 1/2 cups of chicken or veggie stock

-Bring chili to a boil and then turn down to a low setting and simmer for 45 minutes to an hour, stirring occasionally.

-In the last 15 minutes of cooking, chop up a handful of okra and toss in. This will help thicken the chili and give some additional texture and flavor.

-Let cool a bit and serve alongside some cornbread and maybe a cold beer. ENJOY!

This week’s share sees the debut of tomatillos, a lesser known plant in the nightshade family (sharing the stage with potatoes, tomatoes and eggplant). The tomatillo, or husk tomato, is a staple of Mexican cuisine, and the key ingredient in fresh and cooked Latin American sauces. The most well known way to eat tomatillos is as salsa verde. The husk of the tomatillo turns brown as they ripen, and the fruit can be any number of colors when ripe, including yellow, red, green, or even purple. Ripe tomatillos will keep in the refrigerator for about two weeks. They will keep even longer if the husks are removed and the fruits are placed in sealed plastic bags stored in the refrigerator. They may also be frozen whole or sliced.