Posted at 18:41h in Recipes by bloomingglenfarm 0 Comments
0 Likes
Share 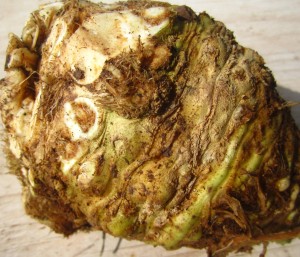 The knobby warty exterior of celeriac, also called celery root, hides a delightful interior. Peel away the rough skin and inside is the smooth ivory flesh, a wonderful aromatic alternative to starchy potatoes. Celeriac is one of those vegetables that can seem intimidating, but after some experimentation it will quickly become a versatile favorite in your kitchen.

Though celeriac will keep for many months in your refrigerator, and up to 6 months in the right root cellar conditions, hopefully you will be inspired to use it sooner. This first idea, because it really is more an idea than a recipe, utilizes celeriac in its raw state. Thanks to nutrition coach Patti Lombardi, who taught a class here at the farm All About Greens, this is quickly on its way to becoming a lunchtime staple in our house! 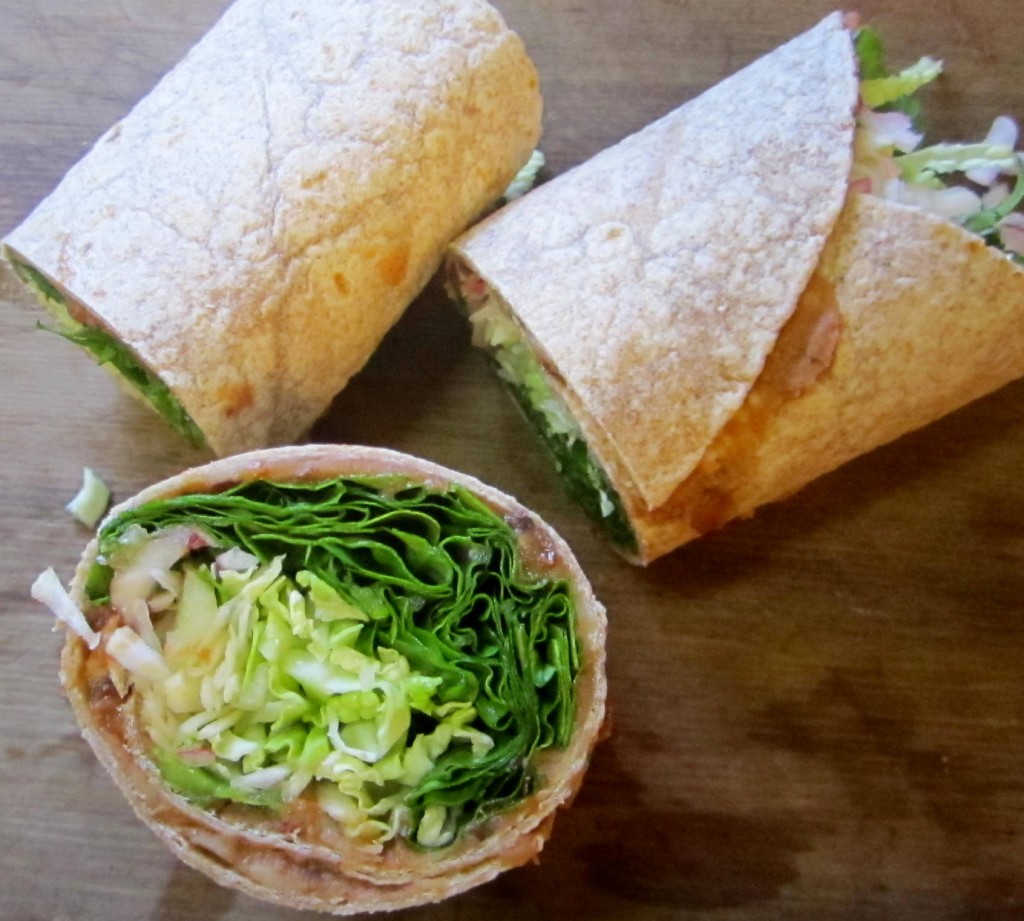 First take one large flour tortilla– I used the biggest ones I could find at Whole Foods- “All Natural Roll-Ups made with whole wheat flour“. Next, decide what you want to use as the “glue”. Patti suggested organic refried pinto beans– spread evenly over the tortilla, and for a little added flavor and spice, a bit of spicy black bean dip (or salsa if you prefer). Hummus would be another idea.

After painting on the “glue”, roughly chop 1/2 a bunch of arugula and pile it down the middle of the tortilla. (You can also experiment with lettuce or kale, always putting the softer greens down first onto the tortilla).

Next comes the crunch- add some finely chopped cabbage. Grate 1/3  of a celeriac, spread on top of the cabbage. Add three grated french breakfast radishes on top of that, and some thinly slivered fennel. I happened to have some ripe avocado, so that went into the mix. Lightly season with sea salt and squeeze a bit of lemon wedge on top.

Then it’s time to wrap it up. Lift the side of the tortilla closest to you (the edge at the bottom of the photo on the top right). Roll away from you into a big tube, using your fingers to press the greens under the wrap and your thumbs to keep the wrap rolling, pressing down tightly as you roll. Don’t worry if you rip it on your first try (I did), but my second one came out perfect. Cut in half (serves 2).

*In the class Patti held here at the farm, her version contained sweet peppers and grated carrot (no radishes), which was a bit sweeter. The great thing about these wraps is you can adjust to your taste, and use whatever happens to be in the share that week. You could also add chicken or turkey if you desire. 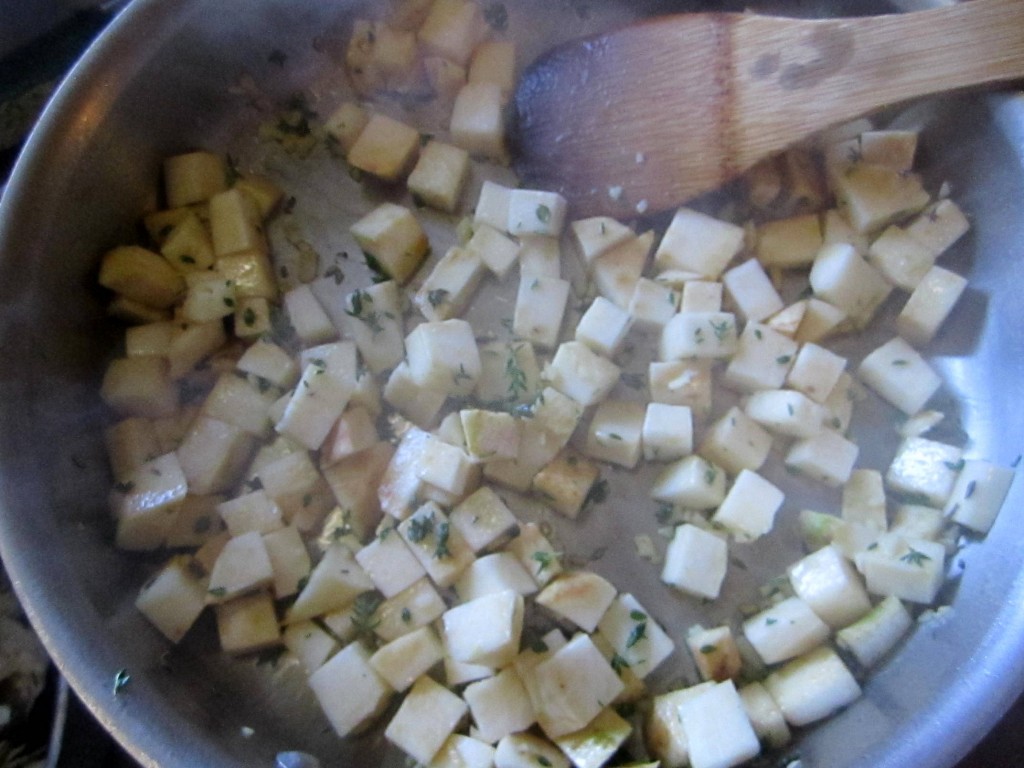 A lot of recipes with celeriac have you partnering it with potatoes in a mash, roasting it with other assorted root vegetables, or adding it to a soup. In this simple stove-top dish, celeriac plays the starring role. Lightly seasoned, the flavor of the celeriac shines through, making for a wonderful side dish. I also imagine it would be great on top of lentils.

Using a paring knife carefully off the rough exterior of one celeriac. Cut into 1/2-inch cubes. Over high heat, put a few tablespoons of olive oil in a large saute pan. Add the cubed celeriac, a handful of thyme leaves, and 2 cloves finely chopped garlic. Season with sea salt and fresh ground pepper. Stir to coat and fry for about 5 minutes. Turn down to a simmer and add 3-4 tablespoons water or stock– I used 3 cubes homemade chicken stock I’d frozen in ice cube trays.  Place a lid on top and cook for around 25 minutes, until tender. You can leave in the celeriac in cubes or smash it a little (somewhere in between a cube and a mash). (*Recipe courtesy of JamieOliver.com) 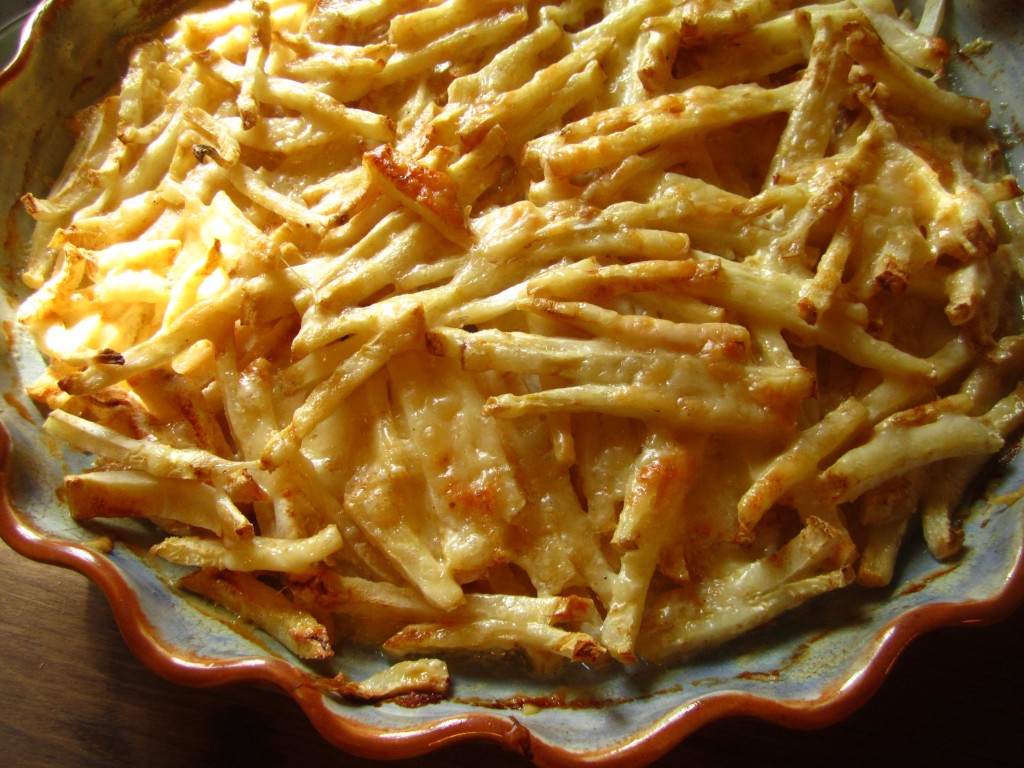 So far we’ve done celeriac raw and a simple seasoned stove-top celeriac saute. Now let’s do an indulgent comfort dish, sure to please any picky eaters in your family.

Pre-heat your oven to 400 degrees. Butter a 1 1/2 quart gratin dish, or large deep dish pie plate. Scatter 4 thinly sliced shallots over the bottom of the dish. Take two large peeled celeriacs, cut in half, then cut each half into 1/4-inch thick slices, and julienne. Arrange evenly in gratin dish. Sprinkle 2 sprigs thyme leaves over celeriac.

In a small bowl, whisk together 1 cup heavy cream, 1 tablespoon Dijon mustard, dash of nutmeg, and salt and pepper. Pour over celeriac. Sprinkle on top 3/4 cup grated Gruyere cheese and 1/4 cup freshly grated Parmesan cheese. Cover with foil and bake 20 minutes. Remove foil and continue baking until top is brown and bubbly and cream is thickened and reduced, about 20-30 more minutes. Let cool 10 minutes and serve. (*Recipe from MarthaStewart.com)

Posted at 18:37h in Recipes by bloomingglenfarm 0 Comments
0 Likes
Share

This week marks the official beginning of fall, and both the weather and veggies seem to agree with the calendar. This is a perfect soup for the transitioning season. It is rich and creamy without being too heavy. When roasted, fennel becomes deeply sweet (totally different from the crisp and refreshing taste of raw fennel) and leeks develop a wonderful caramelized flavor. Celeriac lends body and depth to this creamy soup. A touch of tangy blue cheese and crunchy chickpea crackers make it complete. 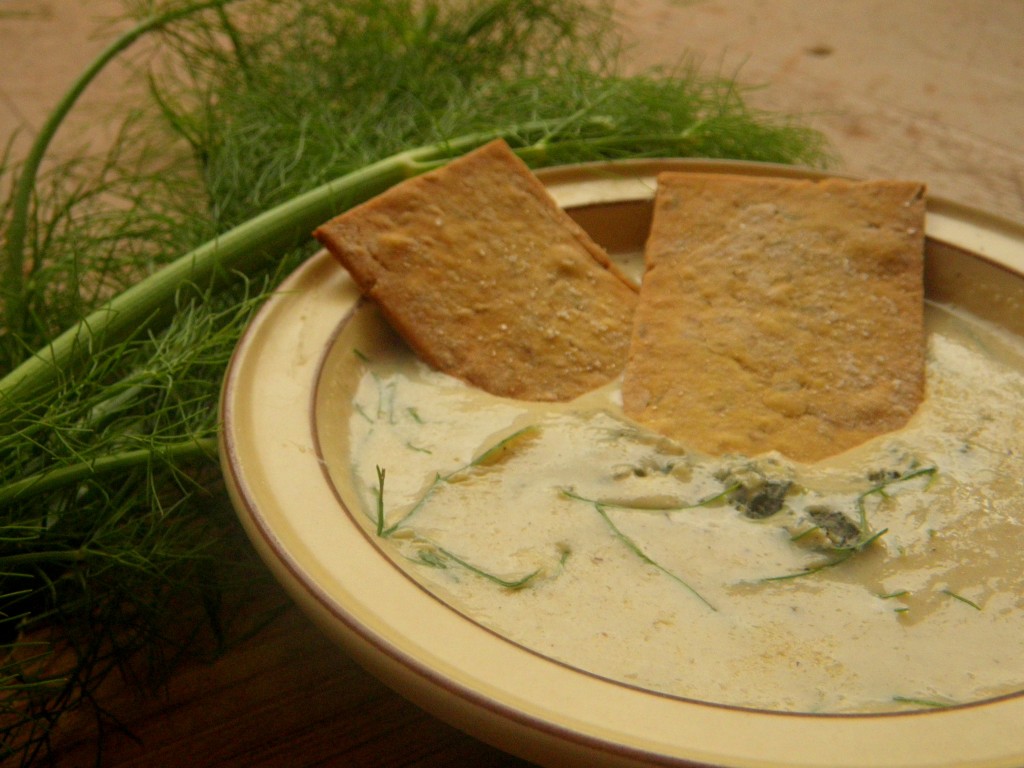 Cut off most of the green parts of 2 fennel bulbs and 3 leeks (save a few of the fennel fronds for garnish). Slice the leeks in half long-ways and run the layers under water to remove grit. Chop fennel bulbs and leeks into 1-inch chunks.

Cut away the ugly outside of  1 celeriac and chop into 1/2-inch chunks. Combine with fennel and leeks and toss with a sprinkle of salt and enough olive oil to coat. Spread veggies in a single layer on a cookie sheet and roast in a 400 degree oven for about 30 minutes (stirring once or twice) until they begin to brown and caramelize.

When the veggies are done roasting, combine them with 4 cups of milk, 1 teaspoon salt, 1 teaspoon cracked black pepper, and 1/2 teaspoon dried mustard powder. Heat until milk is hot, but do not boil. When heated through, use an immersion blender or food processor to puree until smooth. Adjust salt and pepper to taste.

Garnish with chickpea crackers (recipe below), crumbled blue cheese, and a sprinkle of chopped fennel frond for an added touch of the gourmet.

Combine 1 cup chickpea flour, 2 tablespoons sesame seeds, 1 teaspoon fennel seeds, 2 teaspoons olive oil, and 1 teaspoon salt in a small bowl. Slowly stir in 1/4 cup water until a thick dough is formed. Roll dough out into a thin layer (1/8 inch or so) on a cutting board and cut into cracker-sized pieces. Line a cookie sheet with parchment paper or a silicone baking mat. Bake for 20 minutes at 400 degrees until golden brown and crisp (I did this at the same time I was roasting the veggies).

This recipe is easily adaptable–replace fennel seeds with chopped herbs, sprinkle with parmesan cheese, etc. Cut into thinner strips for a salad garnish, or into wedges for dipping into hummus or spinach dip.

Posted at 12:45h in Recipes by bloomingglenfarm 0 Comments
0 Likes
Share

Fall crops are here! Celeriac (celery root) and winter squash are making their first appearance in the share and at the markets this week, so it is the perfect time to brush up on those fall crop recipes or even try out something new.

My go-to preparation for so many fall crops like winter squash, potatoes, or celeriac is to simply toss them in olive oil and roast them. Though it’s delicious and still probably my favorite way to eat them, sometimes a more complex preparation can be a nice change. This recipe is a healthy, vegetarian curry that showcases the sunshine squash’s sweetness and the complex nutty flavor of the celery root. I serve it alongside some rice for a complete and satisfying  meal. 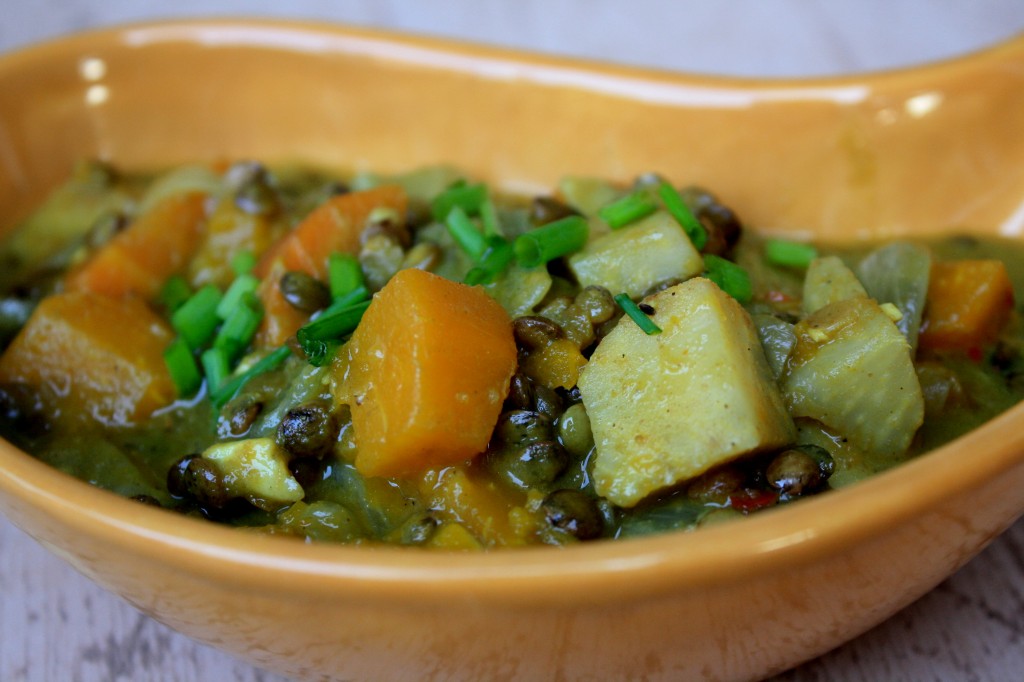 -Half, seed, and peel 1 Kabocha squash–or other winter squash–with a sharp knife (the skin is actually not too hard to peel if your knife is good). Cut squash into 1/4 inch chunks. Similarly, carefully peel and chop 1 celery root into 1/4 chunks. Set aside.

-Heat a large pot over medium heat with 4 tablespoons of olive or coconut oil (I like coconut for this recipe) and toss squash and celery root in with:

-Saute veggies for about 15-20 minutes until tender.

-Add 1 tablespoon of curry powder and 1/4 teaspoon (or more) of red chili flakes. Mix well and cook for 2 minutes.

-Add 1 cup of lentils (any type will do), 1 cup of water or chicken stock, and 1 cup of coconut milk. **Coconut milk can be omitted…just add stock or water instead.

-Cover and simmer mixture for 25-40 minutes until lentils are tender. Adding more stock or water if the mixture is getting to thick.

-Let cool slightly and serve with brown or wild rice. Garnish with a fresh herb like chive, cilantro or parsley! ENJOY!