It all starts with a seed

31 Jan It all starts with a seed

Posted at 16:00h in On The Farm by bloomingglenfarm 0 Comments
0 Likes
Share

Surrounded by seed catalogs, and a revised copy of last year’s 15 page planting chart, we cull together the seed order for 2012. Spread out before us are a few choice catalogs from our favorite seed companies, as well as a few that we like for their descriptions and photos, (but not necessarily their pricing!). Within these pages are contained hundreds of varieties, some depicted with simple black and white line drawings others with glossy photos of the ideal harvest. While we have our tried and true favorites that we grow every year, the catalogs always entice us with new and interesting selections. Often times these new varieties come with outrageous claims of high yields and perfect fruits (we know better). We select varieties with great flavor, that meet the needs of our climate, our soil and our particular disease and insect pressures, while also taking into account what has worked for us in the past, and what other farmer friends have recommended.

Another important consideration when we order seeds is the origin and production of those seeds. As organic growers we always look first for organic seeds. The majority of our seeds are ordered from Johnny’s Selected Seeds (Albion, Maine) and from Seedway’s Untreated and Organic Vegetable Seed catalog (Elizabethtown, Pa). We also fill in with seed from places like Fedco and The Maine Potato Lady.

Lucky for us the seed companies we order from have begun to increase their breeding efforts (done through traditional breeding methods) with the specific needs of organic growers in mind.

As a certified-organic grower and handler, Johnny’s Selected Seeds is able to offer a wide selection of organic seeds produced on its own farm as well as from numerous seed producers worldwide, often from universities like Cornell (developers of our favorite winter squash, bush delicata) and North Carolina State.  If you are confused about traditional plant breeding vs. genetic engineering, take a look at this great page on Johnny’s website where they talk about some of their traditional plant breeding trials. Johnny’s does not sell genetically modified seeds and it does not breed new varieties using genetic engineering. Rather, it breeds plants using traditional methods, a slow and painstaking process that can take eight years or more from the first selection to seed sales. One of the results of their breeding trials, Sunshine, is our favorite winter squash.

“Agriculture and seeds provide the basis upon which our lives depend. We must protect this foundation as a safe and genetically stable source for future generations. For the benefit of all farmers, gardeners, and consumers who want an alternative, we pledge that we do not knowingly buy or sell genetically-engineered seeds or plants. The mechanical transfer of genetic material outside of natural reproductive methods and between genera, families, or kingdoms, poses great biological risks as well as economic, political, and cultural threats. We feel that genetically engineered varieties have been insufficiently tested prior to public release. More research and testing are necessary to further assess the potential risks of genetically-engineered seeds. Further, we wish to support agricultural progress that leads to healthier soils, genetically diverse agricultural ecosystems and, ultimately, people and communities.”

In Seedway’s Untreated and Organic Seed catalog it states: “All varieties in this catalog are developed and produced by traditional methods. None of the items have been genetically modified and, to the best of our knowledge, none of this seed has been contaminated with any genetically modified material. We are certified as an Organic Handler by “PCO”, Pennsylvania Certified Organic”.

The good news is, at this time, very little genetically modified vegetable seed has been developed, and it is unlikely that you would “accidentally” purchase any. Buyers of GMO varieties are forced to sign technology-use agreements. The only GMO vegetable crops currently available are sweet corn, sugar beets and a few summer squashes. Sugar beets are grown to be made into sugar (and are white and shaped more like a lumpy turnip), not to be confused with your standard veggie garden variety red beet. It is the store bought processed food, with added sugar, that you have to watch out for.

Check out this article on the Rodale website from February 2011, when shortly after de-regulating GMO alfalfa, the USDA announced it was allowing farmers to begin planting “Roundup-Ready” GMO sugar beets without a completed environmental impact study (EIS), in order to avoid a “shortage of U.S. sugar”. According to Michael Hansen, PhD, chief scientist at Consumer Union, 54 percent of U.S. sugar comes from sugar beets. This decision appears to be less about science and more about marketing – and Monsanto’s monopoly on seeds. Here’s another great article on the website Red Green and Blue: Environmental politics from across the spectrum, talking about how Monsanto’s GMO seeds already dominate the entire US corn, soy, and cotton crops and essentially the sugar beet market; 93% of soy, 86% of corn, 93% of cotton, and 93% of canola seed planted in the U.S. in 2010 were genetically engineered.  Yet as recently as 2008, sugar beet farmers relied exclusively on traditionally bred seeds; the GM ones weren’t commercially available. Two years later, GM seeds dominate the market.

Back to vegetable seeds. One common assumption is that you need to buy strictly heirloom or open-pollinated varieties in order to avoid GMO’s. Not so. Hybrid vegetable seeds can also be non-GMO as well as all certified organic seed (which can be either heirloom/open-pollinated or hybrid). For us, the best bet is dealing with seed companies who take this topic as seriously as we do, and are transparent about their beliefs, whether it be through signing the safe seed pledge, or by periodically testing their seed stock for cross- contamination.

Even Fedco Seed Company, which test their sweet corn and beet seed for transgenic contamination, states: “We do not knowingly use any *transgenic varieties. (**Transgenic means to introduce the genetic code of one species into another. Transgenic plants are sometimes referred to as “genetically modified (GM)” or “genetically engineered (GE)”.) Please note the word “knowingly”. Because of the possibility of contamination, over which we have no control, our pledge necessarily stops short of being an absolute guarantee.”

That is the unfortunate reality of the times we live in and why it is important for all of us to stay aware of one of the greatest experiments in human history. Unfortunately, hundreds of farmers have been sued by Monsanto for patent infringement. Many of those farmers wanted nothing to do with Monsanto’s GMO crops, but because of pollen drift their crops are being cross-contaminated. 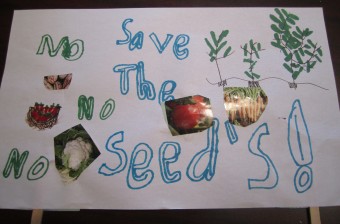 Something to keep an eye on is a lawsuit brought against Monsanto by 83 co-plaintiffs- encompassing a broad range of agricultural organizations, organic certifiers, family farmers and seed growers who all could potentially be damaged by the uncontrolled spread of transgenic seeds and their unchecked potential to contaminate conventional and organic seed crops.

Monsanto’s motion to dismiss the Organic Seed Growers and Trade Association (OSGATA) et al v. Monsanto will be heard in federal district court this morning, Tuesday January 31, 2012 in Manhattan. Judge Naomi Buchwald’s decision will establish if organic farmers are to see their day in court.

Education and awareness are the tools we possess as farmers to maintain the integrity of our seeds and our fields. We are lucky to have seed sources that share our concerns about the spread of transgenic food crops.  However, it is ultimately up to the consumer to be aware of the power of a corporation like Monsanto to exert control over our food supply through its very base, the seeds.