Although we still have a few ziploc bags of Blooming Glen’s chili peppers in the freezer (I halve, seed, and roast them, then freeze for easy use in recipes year-round) we just consumed the last fresh vegetable from our 2011 CSA share last week: a Long Island Cheese Pumpkin.  January is by no means a record for last-squash-eaten, either: going back through my notes since 2006, I see that there were not one but two occasions where I cooked up the winter squash from our final November pick-up in June of the following year!  Tom & Tricia aren’t kidding when they tell us that squash varieties like Cheese Pumpkin or Blue Hubbard are long-lasting!

I happen to think having a giant squash on my kitchen counter for months on end is quite decorative, though I understand tastes may vary.   Still, there are many less visible ways that the harvest of CSA membership lasts and lasts.

My family’s journey with Community Supported Agriculture began in 1994 at the Kimberton CSA (founded in 1987, it was the first CSA in Pennsylvania).  We were members there for seven years before moving to Bucks County.  In 2005 we joined the Anchor Run CSA in Wrightstown, then in its 2nd year of operation.  It was a lovely farm, but a 45-minute drive from our home.  We were thrilled when Blooming Glen opened the following year!  As we enter into our fifteenth year of CSA membership, I thought I’d share some of the yields for us beyond our annual share.

* An end to certain vegetable prejudices 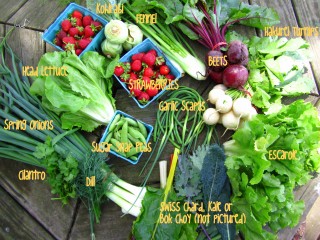 I was not a particularly picky eater growing up, but I hated turnips.  My mom inevitably snuck them into her pot roasts & stews, where they masqueraded as unobjectionable potatoes until I bit into them — blikkkk!

My very first CSA pick-up introduced me to sweet, white hakurei turnips, so delicious raw that I can seldom bear to cook them (though they’re incredibly tasty sauteed as well).  And turnip greens, it turns out, are my very favorite green of all.  I totally fell in love with those turnips, only to be heartbroken when, a few weeks into the growing season, they vanished from the share tables.  The next year I treasured them all the more, knowing they would soon be succeeded in the harvest cycle.

Every year the first bunch of early-season turnips, symbol of fleetingness but harbinger of so many good things to come, reminds me of the possibility of profound & surprising transformation in myself.

Years ago we were eating dinner at a restaurant in Doylestown that had a kind of jokey children’s menu.  It claimed to feature nothing that kids don’t like — like spinach and brussel sprouts.  Our youngest was completely baffled:  “Why on earth do they think that kids don’t like spinach and brussel sprouts?” she wanted to know.  “Because they want to sell you chicken nuggets, I guess,” I told her.  She rolled her eyes.  None of my kids will eat chicken nuggets.  They do love turnip greens in their scrambled eggs, though — a lot.

Unadventurous stages in eating aren’t uncommon, and every kid eventually announces that they don’t like something.  I learned from a wise mom to answer that remark every time with a cheerful, “Well, maybe you’ll like it when you’re [insert their age plus one year]”.  I loved how this gave leeway for growth and change in tastes– indeed, it often seemed to inspire my girls to beat the clock and convert earlier.   Eventually we started calling reversals of taste like my turnip epiphany “turning” a vegetable, as when my middlest announced at age fourteen, “Mom, guess what!  I’ve turned mushroom!”

I have to admit that not one of the three has turned beet yet, and I’ll tell you why: it’s because down deep, I haven’t turned beet myself.  I’ve probably put fifty pounds of beets on the sharing table over the years.  But I happen to love eggplant, so I make it and everybody eats it, though they all (even my husband) refer to it jokingly as ugh-plant.  Serving up, with love, all the varied produce that our CSA has to offer, meal after meal, year after year, has created flexible eaters who can politely eat even un-favorite vegetables.  They know that something more to their taste will be on the table next time.

I became a much more creative & improvisational cook once dinner no longer consisted of planning a meal, then heading to the grocery store to pick up the needed ingredients.  I’m used to thinking,  “What do we have in the fridge to work with?”  and then manifesting something out of what’s there.  My repertoire of recipes and techniques also expanded rapidly, sometimes because I was presented with vegetables that I would never have bought myself, sometimes because I had to find new ways to cook up familiar ones that turned up week after week after week.

Our shopping habits have also been permanently affected by our CSA experience.  We rapidly gave up buying out-of-season berries and tomatoes; they didn’t taste as good, and it felt plain wrong to eat them in the winter.  During the cold dark months we now make it a habit to buy fruit that doesn’t grow in Pennsylvania any time of year: oranges, pineapples, bananas and mangos give us a needed dose of tropical sunshine, and we look forward to the return of local peaches & apples in due time.

Over the course of several years, we also transitioned to buying exclusively organic produce, deciding that we wanted to make a commitment to voting with our food dollar every single time we went to the grocery store.  We spend way more money on food than we used to, and we think it’s completely worth it.  (The real secret to good cooking is high-quality ingredients, as any restaurant professional will tell you.)

Eventually we gave up shopping at chain supermarkets altogether.  Just as Blooming Glen affords the opportunity to get to know Tom and Tricia, and to watch Dakota grow year to year, patronizing our locally-owned health food stores and buying meat from local farms means we know the people we buy our food from in the winter, too.  Where I shop, if I turn up without my kid in tow I get asked,”Where’s Sophie?”   If it turns out that I left my wallet on the kitchen counter, I can even write an IOU!  I don’t think that would fly at the Giant!

I certainly remember feeling a little challenged at first to make it through our share every week.  Going out of town was particularly difficult; now in addition to arranging for pet-sitting, I had to figure out how to cook up or otherwise preserve the vegetables.  I announced to everybody I knew that being in a CSA was more work than having a dog!

In self-defense, I learned to can tomato sauce and pickle green beans.  I learned to freeze.  I learned, sadly, that dehydrated beets are not tasty at all.   I learned that it is in fact possible to serve greens at every meal.  I put kale in my kids’ macaroni and cheese and turnip greens in their eggs and squash in their muffins.  They gobbled it all down.  Eventually they got so big and ate so much that we never had any problem using up our share — and then two of them got so big that they grew up and moved out.

Last year I got lapped on my veggies more than once, and learned that I had gotten overly smug about my coping-with-abundance skills.  It’s a cycle, I guess.

Our oldest daughter was a year old when we joined Kimberton CSA, and I was pregnant with the one who would turn out to be our middlest.  Our youngest, who is now nearly 10, was 4 when we first came to Blooming Glen Farm.  Nowadays my very favorite sight in the shed (even more than the beautiful pearly globes and glowing greens of my beloved turnips) is the moms with babies in slings or toddlers in tow — especially the moms with both. 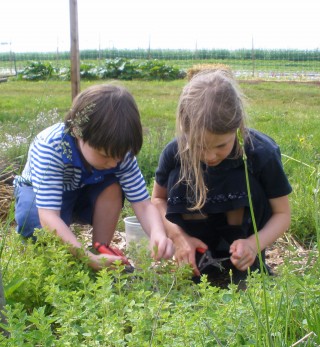 The author's daughter at the farm in 2009, harvesting oregano with a friend.

Seeing children painstakingly counting or weighing out veggies for the share, or eagerly helping pick strawberries, green beans, or cherry tomatoes, brings me back to the days when farm visits lasted at least an hour and sometimes seemed to go on all afternoon.  Bags and baskets fill slowly; walks to the pick-your-own crops are long for little legs; walking back can seem even longer for the mom carrying a tired toddler on a hot day!

It’s almost impossible to imagine them growing old enough even to play in the children’s garden unsupervised, let alone go off with a pair of sharp shears to cut flowers.  But eventually there might come a day — it did for me, anyway — when your ex-toddler, sporting a brand-new learner’s permit, actually drives you to the farm to pick up your share.  You’ll try not to flinch and gulp too obviously, knowing at this stage they need a lot of practice, not a lot of criticism.  You’ll get out of the car feeling thankful that the ride is over, and wondering whether you’re really going to be able to fake being a calm passenger all the way home.

You’ll look around.  You’ll see Tom on his tractor, a kestrel overhead, kids crawling through the squash-blossom tunnels in the children’s garden, a woman with a bright bouquet in one hand and a baby on her hip.  You’ll smile at her.

You’ll go into the shed.  It will smell of tomatoes, arugula, corn.  You’ll start to weigh out your share.  It all goes very quickly when you’ve had a lot of practice.

Fueled by veggies from Blooming Glen, meat from Tussock Sedge, and sustainably-caught fish from Otolith, Jenny Isaacs is the director of Secret Garden Montessori school in Frenchtown NJ and the founder of Bucks County Renewables, a nonprofit devoted to advocating for electric vehicles.