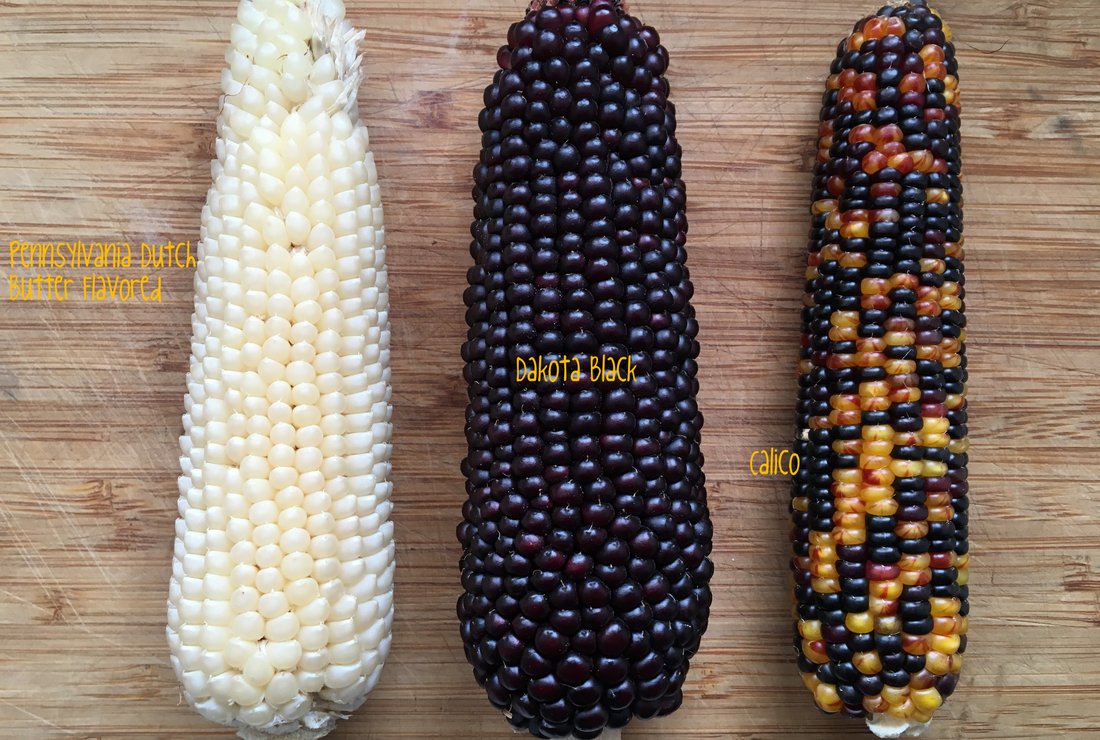 Posted at 14:40h in Recipes by bloomingglenfarm 0 Comments
0 Likes
Share

This season we experimented with new popcorn varieties, in our quest to find one that not only grows well and tastes great, but also has large enough ears to go through our hand crank sheller. First up are the golden yellow kernels of the variety Pennsylvania Dutch Butter Flavor. This is a pre-1885 heirloom popcorn maintained by the Pennsylvania Dutch, introduced in 1988 by Southern Exposure Seed Exchange. It has a superior flavor to commercial popcorn (as really all the varieties we grew do), and pops into nice fluffy white kernels. We also grew the beautiful dark glossy Dakota Black, an open-pollinated variety bred by Prairie Road Organic Farm in North Dakota and Calico, a colorful heirloom variety from Minnesota. (I read in one report that Calico pops most consistently if you freeze the kernels first then throw them directly into a kettle with hot oil. I haven’t tried this yet, and have had good luck without doing so.)

At our house we use an air popper to pop our popcorn. But you can just as easily make it on the stovetop, electric or gas, which I experimented with for the following recipe.

Melt the coconut oil in large pot over medium-high heat. (A heavy bottom Dutch oven is preferable but my regular 4 quart stainless worked fine- you just want a pot that has a fitted lid.) Add 3 kernels of corn and cover and cook until all 3 kernels pop.

Take the three kernels out of the pot. Add the rest of the popcorn kernels. Cover and take the pot off of the heat. Wait 30 seconds.

Put the pot back on the heat. Cook, shaking the pot occasionally. After about 2 minutes, and the popping has slowed down, remove from heat and take the lid off of the pot and let the steam out. Pour it into a bowl and add your toppings. I just added sea salt to taste, which is a great complement to the mild coconut flavor imparted by the oil. You of course can add your favorite toppings, be it salt and butter, or try nutritional yeast and savory herbs like rosemary, or go for sweet with a cinnamon and honey-butter combo or spice it up with dark cacao powder and cayenne pepper.

Post and photos by Tricia Borneman, Blooming Glen farmer and co-owner.  Tricia and her husband Tom have been farming together since 2000. Blooming Glen Farm is celebrating its 11th season bringing high quality certified organic vegetables, herbs, fruits and cut flowers to our local community.