David Koschak, 36, joins us for his second season of farming, having spent last season pasturing chickens, pigs, and cows with Forks Farm near Bloomsburg, PA. David is an architectural designer by training, having first studied English and Environmental Science at Wilkes University in Wilkes-Barre, PA and then receiving a Masters degree in Architecture from the University of Oregon.  He has spent the last six years working in architectural firms in Northeastern Pennsylvania.  David’s hometown is Dushore, Pennsylvania, a small town in the Northern Tier.  He currently resides in Wilkes-Barre.

“I grew up in a very rural and poor area.  I was very affected by the physical and cultural changes I saw occurring during my childhood.  I wanted to better understand why these small northern Pennsylvanian towns were shrinking, why beautiful old buildings were neglected or torn down, why farms continued to disappear, why everyone young moved away, why so many people were extremely poor, and why my own family’s farm, now owned by my uncle, may no longer be ours after 150 years.

The story was always that it was no longer possible to make a living milking, there was no longer a market for small-scale egg production, or there was no longer money in lumber. To me, it seemed crazy that we were creating a world where only large-scale commercial production existed. Why didn’t we buy eggs and meat and veggies from each other? For me personally, the large-scale alternative meant that the world I loved was being phased out.

I studied Architecture to be a part of the physical changes that occur in our communities.  I wanted to be more involved in the decisions about what kind of buildings we built and what part of our history we chose to tear down.  I moved to Oregon to study Architecture and ended up also learning about local sustainable agriculture and local economies.  It was the first time I saw a community that overwhelmingly valued local organic food (and may even have bought some veggies from Tom and Tricia at the Saturday Market in Eugene, Oregon).  I was inspired and excited to see this as a possible way for us to move forward and I wondered how this may become true back home in Pennsylvania.

Since coming back to the east coast I have been interested in not only working to create better buildings, but also richer communities through a stronger more vibrant local food system.  A highlight of the last few years was to have worked on the adaptive reuse of a historic silk mill.  This project included the design of a café featuring local produce and local pastured chicken from Forks Farm where I also worked.  I am with Blooming Glen this season to continue to better understand what role I can play in the growing network of people and food.  I hope one day that I’ll be able to combine my architectural and agricultural experience and possibly help tend my family’s farm for another generation.

I remember, as a kid, believing there was a garden behind our town’s grocery store.  And I remember being very confused when I didn’t see one there.  I wish I hadn’t been wrong.  But for now, I am happy to be currently living on a farm where there is some truth to that idea.” 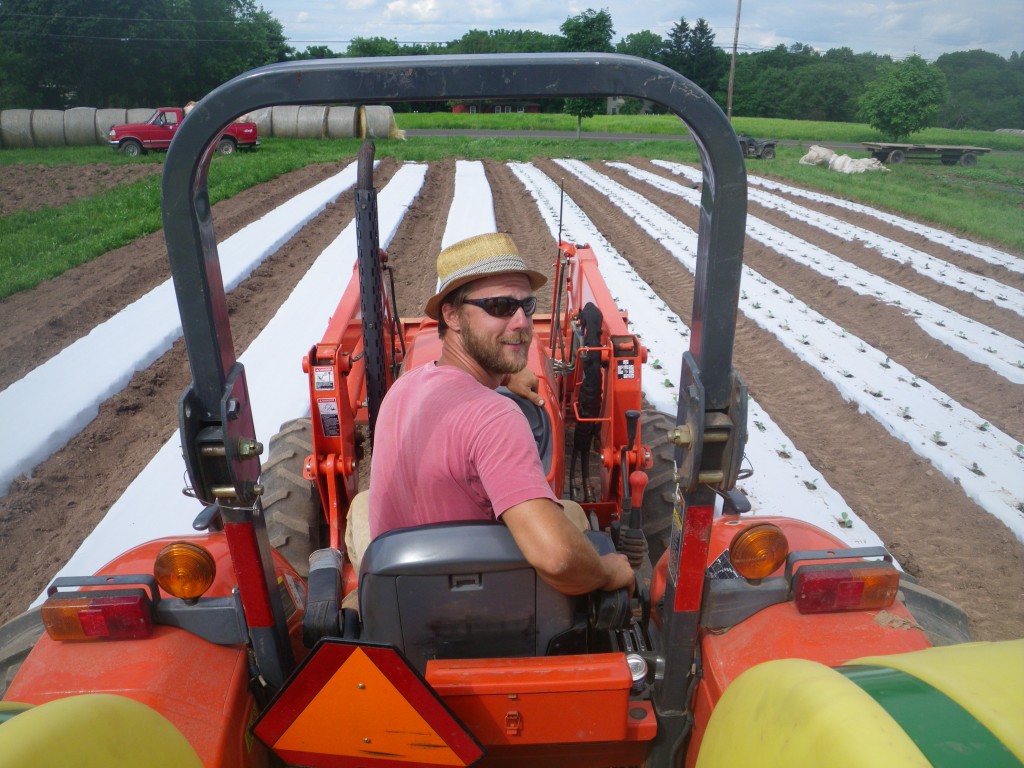