It’s almost March- I guess on most other years it would be already! As busy as we’ve been, it kind of feels like this leap day, we get a “free” day. It’s been an incredibly mild winter- I don’t need to tell anyone it feels like Spring. Tom was able to work up some ground yesterday to get ready to plant our onion sets, it’s been that dry. The propagation greenhouse underwent a makeover. Thanks to some “new” used greenhouse benching, our flats now actually lie flat- no more wavy gravy, which means less water pooling and more even germination. Today the onions are being seeded, and already you’ll see tomatoes, lettuce, broccoli, kale, swiss chard, kohlrabi and cabbage sprouting in the greenhouse flats. 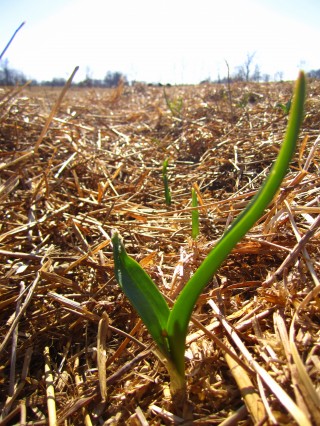 One of the great things about Blooming Glen Farm is the influx of new faces and energy every season. One of our highly valued missions here at the farm is to mentor and train future farmers. In another month our interns will be joining us, a great new group of young people from Washington, New Hampshire and Wisconsin, as well as Kate, returning for another year from Colorado. You’ll be hearing more about all of the new farmers joining us this season, so you can have an idea of the many hands behind the harvest headed for your dinner plate. Our skeleton crew of employees has been busy these past few weeks, seeding, working on construction projects and winter repair, and thinning out the thick blanket of straw that covered the garlic all winter, so that the new pale green garlic shoots can poke through. Our early crew consists of: Jillian Herschlag, our assistant manager, returning for year three; Brian Smyth newly engaged and returning for year two and a half; and a new face on the farm, Brandon Grossman.

Brandon, 24, comes to Blooming Glen Farm with a few years of experience working on a farm on Mount Desert Island in Maine that he started with his girlfriend’s family. Together they ran a small CSA and market garden, growing throughout the summer and into the cold winter months in Maine using a wood heated greenhouse for season extension.

Brandon graduated from Oberlin College with a BA in Neuro-Science. Not too long after graduation, a job in his area of study brought him to Maine. However, he quickly decided to trade in a laboratory of beakers and research for the broader laboratory of farming.

“I think I was initially rebelling from the standard path of what was expected of me- get a degree, get a job in your career path. The idea of what a farmer was- an uneducated tobacco spitter- I wanted to break down those misconceptions. Farming was so different then how I grew up. I grew up eating Wonder Bread and Dunk-a-roos. I was always that kid in class and in the office, fidgeting, and wanting to be outdoors. So I chose to go down a path that would get me outside, living a healthy lifestyle.” 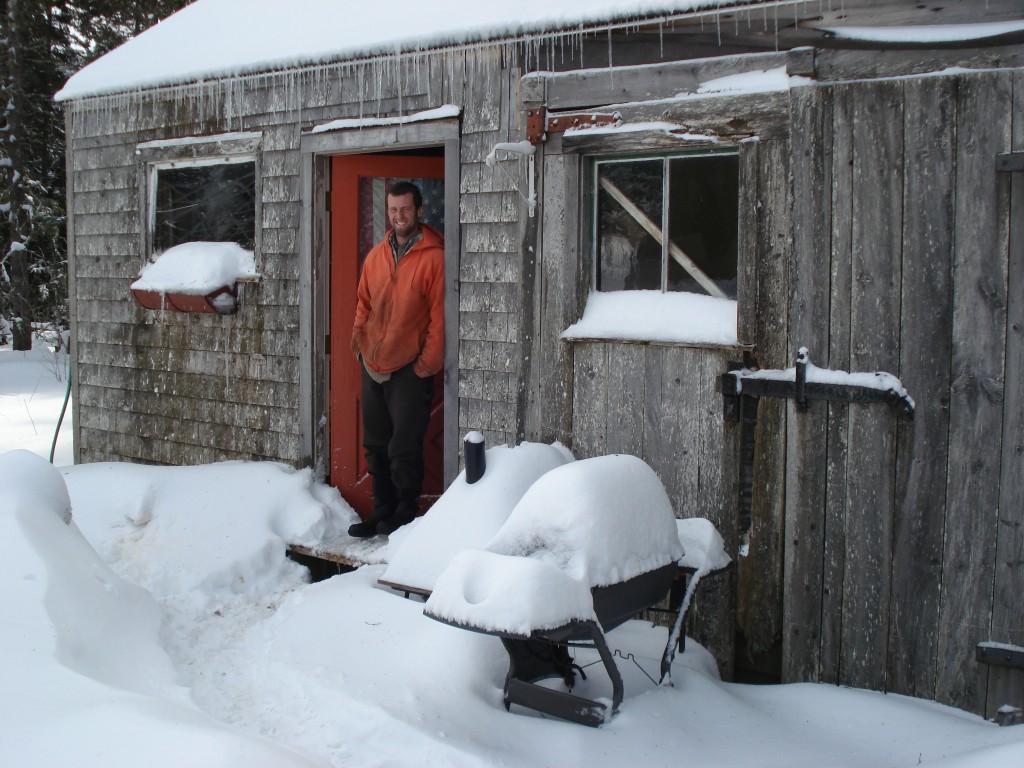 Brandon at his farm in Maine.

However after three years living in a half-insulated shed, struggling to make ends meet and chopping firewood all winter, both his hands and soul grew cold and homesick. He decided to return to Bucks County where he grew up- Brandon attended CB West and when his folks moved to New Hope area, he graduated from New Hope Solebury High School.

“Most of the things I learned about farming were self-taught, through trial and error. I’m ready to learn farming from professionals, and be closer to family.”

When Brandon’s not at the farm, you can find him and Chad, his close friend and identical twin brother, on Sundays down in Suburban Station in Philadelphia playing music to the subway riders. Brandon comes from a very musically gifted family. Lately you’ll find him on guitar and his brother on ukulele, both doing the vocals, but Brandon also plays the saxophone, drums and ukulele. We’re happy to have him on the farm!